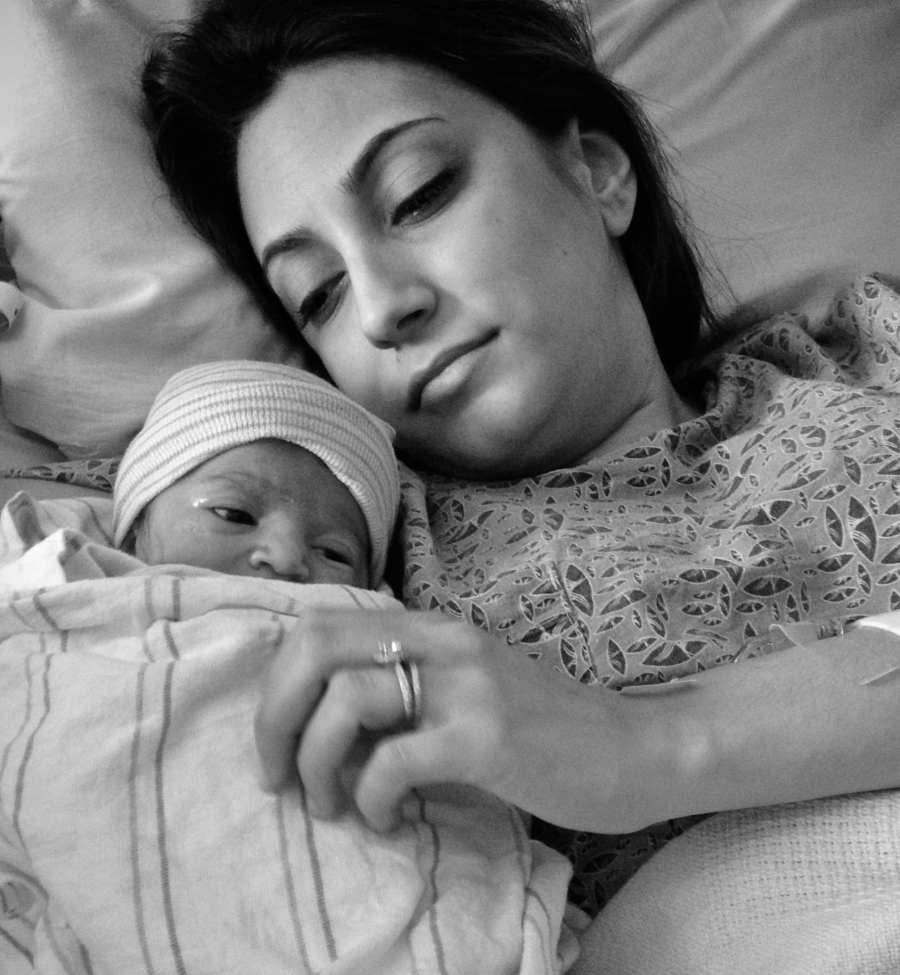 Yesterday, Emi turned seven months old. We planned our whole day around a photo shoot we did on our porch. I made sure to put her in a cute outfit. I made sure she took a good nap and was fed right before we took her outside. I  wrote a number 7 on a pumpkin. I set her down, and moved out of the way while Mgo did his thing with the camera. I tried to feel all the things you’re probably supposed to feel during your daughter’s 7 month photo shoot. Of course, I was happy. But I also couldn’t help but feel anxious. Every time we celebrate her birthday, I remember that my life was changed forever. On April 3rd, I met my daughter. But I also remember that I almost lost Emi. Mgo almost lost us both.

But aside from all of that, I think about all the things I missed out on:

Seeing and holding her as soon as she was born.

Watching the nurses give her a bath and swaddle her for the first time.

Being asked what her name will be and naming her with my husband.

Seeing Mgo’s face upon meeting her and seeing him hold her for the first time.

Reveling in that precious moment of holding our brand new baby and celebrating her birth together with my husband.

I missed out on that moment of pure elation at the reality of becoming a parent upon first seeing her. Instead, I met her in a poorly lit hallway. It was a pit stop on my way to my post-par tum recovery room. The nurse who was wheeling my bed to the post-par tum ward said we were making a quick stop to pick up my baby. The doors opened and Mgo came out to meet me and instantly I was jealous. He had a glow that was foreign to me, but it took a mere second for me to realize it was the glow of pure joy – a joy that I was missing. A woman I didn’t know followed close behind him, holding a small, squirming bundle. She turned her around and held her out to me. I stared at this baby who had more hair than I’d ever seen on a newborn’s head. It stuck out in all directions. Her eyes were closed. And it seemed like everyone around me held their breath and waited for me to do what I was supposed to do. I waited, too. And when nothing happened, when I didn’t instinctively oo and ahh, when my arms didn’t automatically reach out and take her from this strange woman, when I didn’t feel anything, except for the grueling nausea from the anesthesia, I forced a smile. The nurses looked at one another and then placed her on my legs.

“Okay, mommy, here we go,” the nurse behind me said. “Let’s get you to your room. Follow us, Daddy.”

I was dizzy, disoriented, and angry. I had missed her birth, and now I was supposed to bond with this newborn that slept comfortably on my legs. Feeling her warmth scared me, because she felt real and as we made our way to our room, I realized that from that moment on, I was responsible for her. And in that moment, I didn’t want any of it.

In our room, Mgo did what he does best. He cared for us both. He didn’t once make me feel like a bad mother for saying no every time he asked if I wanted to hold her. I don’t know why I didn’t want to. I had waited so long for that moment. For the moment I’d finally see what she looked like, hear what she sounded like, to feel what she felt like… It took hours, but Mgo finally convinced me to have her lay next to me on my hospital bed. So we put a pillow down, and her on it. I started by pretending to be a curious new parent, for his sake. I slowly placed my hand on her thickly swaddled body and she started to cry. I froze. Mgo picked her up and put a glove on. He put his finger in her mouth, and she calmed down. I was jealous again. He already had this parenting thing down. He knew how to make her stop crying! He brought her to me again, but this time he sat on the bed next to me and held her closer to my face. Suddenly I smelled her sweet pink, newborn smell and I heard her gentle breaths.

Suddenly it was a little less scary.

Suddenly I loved her more than anything else I’d ever loved.

And I didn’t sleep. Not only because recovery was really hard on my body, but because I lay awake just staring at her, trying to take it all in. I watched her sleep. I watched Mgo change her diaper over and over again. I watched him cuddle her and talk to her in hushed tones. I watched him be a dad and realized this was what I was waiting for during my whole pregnancy. To witness the joy this little girl would bring.

And sometime in the early morning, when the first light crept in through our window, I felt it and held onto it while I watched her. It was her first morning. I looked over at Mgo and he was watching us both. She was ours. Finally. She was with us. She made it.

Every night, Mgo reminds me that even though it was a rough pregnancy and delivery, she’s here. She’s healthy. She’s beautiful.

But I still think about those moments I lost and wish I savored those first few moments I had with her even though they weren’t like I imagined they would be. Even though I wasn’t feeling well physically and was still in shock about what happened in the OR.

Even though it had felt like I had settled at the far side of the sea, God was there. When I became paralyzed, going from being in control to relying on a machine to breathe for me, those bursts of oxygen that were pushed into my lungs reminded me that I’m not in control. God is. I wake up each morning because He chooses to give me life. He chose to sustain me in that OR, and now I get to see Emi smile every day in the arms of her daddy.

In the darkness, God was there. When my mind returns to that place, I think of my thriving girl and praise God for giving me this gift – this time on earth with her. I pray that she comes to love Jesus as much as we do so we can enjoy her in heaven, too.

I walked through the shadow of death, and He was with me. When my mind wanders to that place, I cling to the hope I have in my merciful Father.

And I hold Emelia close.