I never chose to stop writing, but it happened, right around the time I became pregnant. My thoughts became transfixed on the little one my own body was suddenly home to. I was her shelter. My body nourished hers. I became entirely focused on taking care of myself and daydreamed about what the baby would be like and how my life would change. And every day that passed, it became easier and easier to ignore inspiration and be entranced by the impending arrival that I was certain would change everything. I told myself I’d get back to it. I didn’t know that my break from writing would be such a long one.

Emelia is two years old and a peculiar emptiness has crept upon me. It’s the feeling of something missing. Of not feeling quite content and then battling the guilt as a result. It’s an annoying game of tug and war. Dissatisfaction pulls and then self-condemnation lurches forward. So I chose some time to sit with it and think. Postpartum depression? Thankful, no. Boredom? Not quite. Selfishness? No. I love being Emelia’s mom. My role as a mother is the best one I’ve ever taken on. The sacrifice it takes stretches me in the best possible way and makes me the best me I’ve ever been.

But it’s not always exhilarating.

What did she say?

Mommies, I see you, and it’s okay to think it or even say it: motherhood is not always exciting. That doesn’t mean you don’t love your children. It just means that the 3 am feedings, the 2 pm tantrums, the 8 pm bedtime fights, the daily 9 am loads of laundry, the 11 am stranger at the grocery store telling you you’re doing it all wrong, the 1 am waiting for your teenager to call or come home or just tell you what’s going on is not always easy. Sometimes it just plain feels hard or even, dare I say it? Mundane.

But one thing is for sure – it is incredibly inspiring.

There are moments when I get a flutter in my stomach just watching her live and learn and be. When Emi wants to read the same book over and over, when she smiles at me, when she is sad and wants to cuddle, when she hugs me and pats my back, and especially when she practices make believe. The more I watch her play, the more I want to play.

It’s inspiration, nudging me, filling me with wonder and a desire to create.

The sea fascinates me and terrifies me in equal measure. The depth of it. The not knowing what is lurking in the darkness. During our recent trip to Kauai, I chose to leave fear on the beach and jump into the crystal clear water, holding hands with wonder. It was cold at first, and fear tried to talk me out of it over and over. It told me the sand was warm. That I should just lay in the sun and rest my tired momma soul.

But wonder looked at me in the eye. “Don’t you want to know what’s down there? What if it’s magical?” 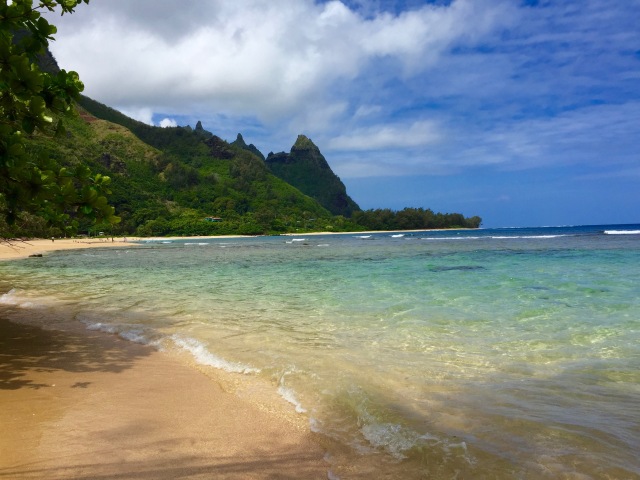 So I followed him in, hesitant but hopeful. And I felt free, floating with the current, slowly swimming farther and farther in. Soon, I saw a fish. A bright yellow one with a long nose, gliding gracefully. Then I saw a bright pink, blue and green one, darting quickly, almost too fast for me to get a good glimpse. Then there were dozens, swirling all around me. Long skinny ones, large ones as flat as paper and almost completely see-through. And suddenly I felt like I was flying, exploring a world I didn’t know existed.

I’m standing on the shore of the sea of stories waiting to be written. I know sometimes the work will be slow and sometimes it will be bright and fast. Some days I’ll be eager to jump in and others I will wade in slow and hesitant.

But I’m ready. I’m jumping in. I’m going to swim every day. It will be scary. It will be breathtaking. It’s my forever home.